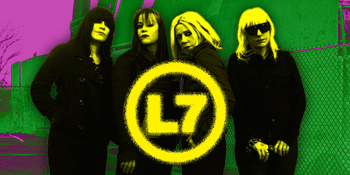 Grunge rock legends, L7 are set to unleash their live force when they return to Australia and New Zealand in May 2021  Unmistakable in their own unique sound, L7 pioneered the grunge movement with their furious music and feminist ideals. Following their breakthrough 1992 album Bricks Are Heavy, L7 became one of the most highly-regarded grunge acts of the era with hits like "Pretend We're Dead” and “Shitlist”, while their live sets were infamous, fuelled by high-energy, slamming, dancing and stage-diving.  L7 make their comeback to Australia and New Zealand May 2021, gracing Sydney, Melbourne, Brisbane, Adelaide, Wellington and Auckland stages with a snarl, a wink and their latest album Scatter The Rats in tow.
On L7’s new album Scatter The Rats they remain a raucous, subversive, and vital voice in rock. Back with their trademark distorted, heavy riffs, headbanging rhythms and indelible melodies, L7 are taking on society’s biggest dickheads, the fakers and liars, and everyone who doubted them.
No one collective has rocked harder and rejected cultural conformity with more of an edge than the combined forces of Donita Sparks, Suzi Gardner, Jennifer Finch and Demetra "Dee" Plakas. With a career, highlighted by healthy activism and a revolutionary spark, rock music can’t escape the influence of L7.  L7 are raw, chaotic and enduring pillars of rock music - catch their ferociousness live when they return to Australia and New Zealand in May 2021!  “one of grunge's most fierce and uncompromising bands.” – ABC “the legendary women’s rock team” – Alt Press “L7 return as a bloodthirsty gang and live up to their legacy.” – Rolling Stone